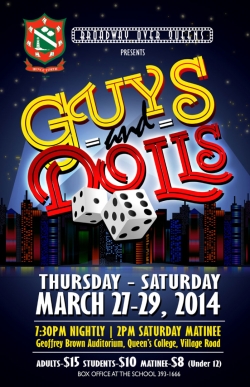 The production, ‘GUYS & DOLLS’ was held from Thursday, March 27 - Saturday, March 29, 2014 at 7:30 p.m. with a Matinee on Saturday, at 2:00 p.m. The story surrounds a group of ‘Runyonland’ characters intent on holding a dice game, ‘The oldest establishment’ in New York. But with the cops breathing down their necks and girlfriends adding to the stress, Nathan Nicely-Nicely and Benny Southstreet must come up with a plan that will ultimately save their reputations and save their souls. This production was directed by Mr. Greg Deane, Head of the Modern Languages Department at Queen’s College and a Queen’s College alumnus who is also a veteran of the Dundas stage. The performances was held in The Geoffrey Brown Auditorium on the school’s campus.